Internet is transforming our life. Starting as a confined defense project of the U.S ,it  blew out proliferating into every sector of our society. So much we call it our 'virtual world'.

It is today's most reliable and qualified source of knowledge.How did the internet achieve this in such a short span of time? It was the culture that it brought in, that was so viral . Every information that we wanted was just a click away with the internet. It came with its unique 'style', it represents opinion of people starting from the pioneers in the field to a yeoman. In short , it gifted us with the 'wiki' culture. A culture that epitomizes democracy in it's purest forms,where people can express what they feel strongly.

Now, imagine you found out something valuable ,some scandal ,fraud, and you want to let the world know. Web becomes your best platform,may be you blog about it. But before the world gets to hear about it, it was lost!!Your post had been removed.The suppression is almost real.
This day is not far once the new IT rules are passed in the parliament.
The Central Government notified the Information Technology (Intermediaries Guidelines) Rules, 2011 in April, 2011. The rules which seek to control the intermediaries end up controlling the actions of users. As these rules attempt to cover a wide range of activities through a duplicate, complicated structure, neither the industry nor the end users are able to understand the boundaries of their rights and duties.

Internet democracy in India has faced it's biggest threat ,today.It is going to effect common man greatly. It is a breach to our freedom of expression.

On 21st April , a protest was held against Internet Censorship in opposition to the revised IT rules under consideration.
A mass of young ,energetic and vibrant youth , software engineers  and bloggers voiced their opinion . Being among them I felt the power of connectivity, an air of pride, of struggle for freedom.
People sang in vigor, held placards and shouted slogans to save the internet.There was also a very enlightening play , that showed how the government was going to criminalize common man on a small pretext that he posted on the facebook . As a very wise man said jocularly 'Isn’t it an insult to the 'real' criminals if one could go to the jail just by posting something on web.'

I really hope the Indian government keeps the democracy alive by not passing the bill.Let's all strive for betterment of the society and let freedom of expression prevail. 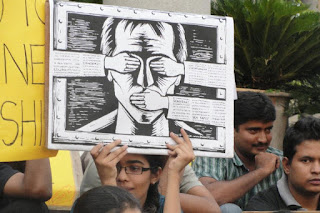 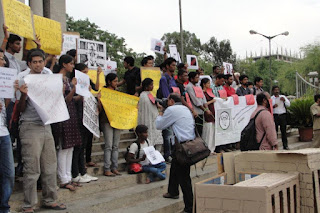